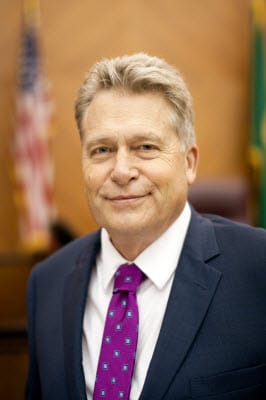 Steve Thayer has practiced law with an emphasis in criminal defense in Vancouver, WA since 1977. He is a Founding Member and former Vice President of the Washington Association of Criminal Defense Lawyers. He was honored in 2015 by that organization as a recipient of The President’s Award for excellent service to his clients in 2014. He has been A-V Rated by the Martindale-Hubbell peer review process for over 15 years, and has appeared in the Bar Register of Pre-Eminent Lawyers for many years. He has also been honored by his peers as a Super Lawyer many times in the survey of Washington attorneys conducted by the Washington Law & Politics magazine.

Mr. Thayer has tried and won a variety of high profile assault, vehicular homicide, and murder cases. He is a well-known advocate for the right to bear arms and the right to self-defense.

Perhaps more innocent men are accused and charged with sexual assault, rape, and molestation than any other felony offense. Mr. Thayer believes nothing is more important than the acquittal of an innocent man, and his reputation for winning these cases is unsurpassed. He has obtained not guilty verdicts and dismissals for many clients charged with child molestation, rape of a child, date rape, indecent liberties, etc. Over the years, he has successfully defended the President of the Vancouver School Board, the son of the Mayor of Vancouver, police officers, teachers, coaches, and many other high profile clients. Publicity from many of those cases may be viewed on our website (see Business section)

Mr. Thayer has saved many men from prison sentences in both the state and federal courts. He recently he obtained dismissal of child pornography charges brought against a 61 year-old lawyer in the Clark County Superior Court. Although many lawyers handle these cases, there simply is no substitute for experience.

Many clients are falsely accused by spouses or relatives, and many of the cases involve mutual combat between the parties where self-defense comes into play. The State has the burden of proving that the accused was not lawfully acting in self-defense as a result of a case Mr. Thayer won in the Washington Supreme Court in 1982.  State v. Acosta, 101 Wn.2d 612, 683 P.2d 1069 (1984). He has achieved successful outcomes for many clients recently, including a not guilty jury verdict for a police officer who was charged with domestic violence assault in November of 2014.

The potential consequences of a DUI conviction can be devastating, including the loss of license, jail time, fines, and increased insurance premium. Mr. Thayer brings over 35 years of expertise and experience to the defense of these cases and has won dozens of DUI trials.